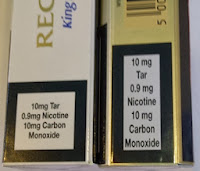 It can be very frustrating when I read that people in the EU, making laws about e-cigs, seem to be saying that liquid containing 20mg/ml of nicotine is equivalent to 20 cigarettes.

The problem comes from a lack of understanding of the subject.

They therefore state that 1ml of liquid is equal to 20 cigs - right ?

Now then, it is quite normal for new e-cig users to occasionally make this easy mistake - if they ask about it on a vaping internet forum they will receive the answer very quickly.

It is, however, completely unacceptable, negligent and ignorant for someone involved in the EU policy making to make this mistake. It demonstrates, at best, a complete lack of research - at worst, false propaganda.

It is easy to find out how much nicotine is actually in tobacco - HERE - and it is at least 10 times higher than the figure on the packet.

The amount of nicotine on the side of a cigarette pack is the dose of nicotine delivered to the body.

So, to compare the cigarette figure with the e-cig figure is quite simply not comparing the same thing.

Tobacco smoking is the fastest way of delivering nicotine. If you use 1 ml of 20mg/ml e-liquid (over several hours), then not all of the nicotine will be absorbed into the body, and also the rate of absorption will be much slower than smoking tobacco, and nicotine is relatively rapidly metabolised - so the quantity of nicotine used will not be equivalent to the levels of nicotine obtained from smoking.

The rate of delivery is important - and in fact, it is believed that the concentration of nicotine in e-liquid that is required to deliver nicotine at the same rate as smoking tobacco is, in fact, 45mg/ml

The choice of strengths is important, and for those that need a higher dose then 20mg/ml there is a very good reason why.

When looking at dosages, there are 2 important units of measure, T-max and C-max. T-max is the time to deliver the dose and C-max is the concentration that is delivered. ( Cmax is a term used in pharmacokinetics refers to the maximum (or peak) ... the drug has been administrated and prior to the administration of a second dose.)


As you can see, there is not much difference between the time taken to deliver a dose of nicotine.

BUT - there is a huge, tenfold, difference between the C-max - in this case a 16mg/ml e-cig was used.

So - to come back to my original point :

You cannot compare the dose delivered from a cigarette with the concentration of nicotine in e-liquid - and most certainly not just by doing a quick sum, in your head, based on 2 labels.

The two figures are a measure of two completely things and in any case, the pattern of usage is different again.

Anyone that knowingly tries to do a simple mathematical comparison with cigarettes and e-liquid is a liar and attempting to deliberately mislead.

- Further recommended reading on this subject:
WHY 20mg/ml E-LIQUID IS USELESS FOR MANY
by Dave K.   -   aka 'The Happy Vaper'